On a recent trip to Google headquarters in Mountain View, California, I was able to get up close and personal with one of the world’s most well-known company cultures.

Before stepping foot on campus, I’d already had an idea of what to expect.

But I got to wondering: If I didn’t know anything about the famous Google culture, what would I be able to tell about their culture just from what I saw around me?

Here’s a look at what I saw at the Googleplex and how it all reflects on Google’s company culture.

Though I only spent one day at Google headquarters, there was plenty for me to see that pointed to what it would be like to work there.

Thanks to an invitation from our favorite Utah-based marketing agency, Avalaunch, a couple members of our marketing team were able to get an inside look at how Google works. 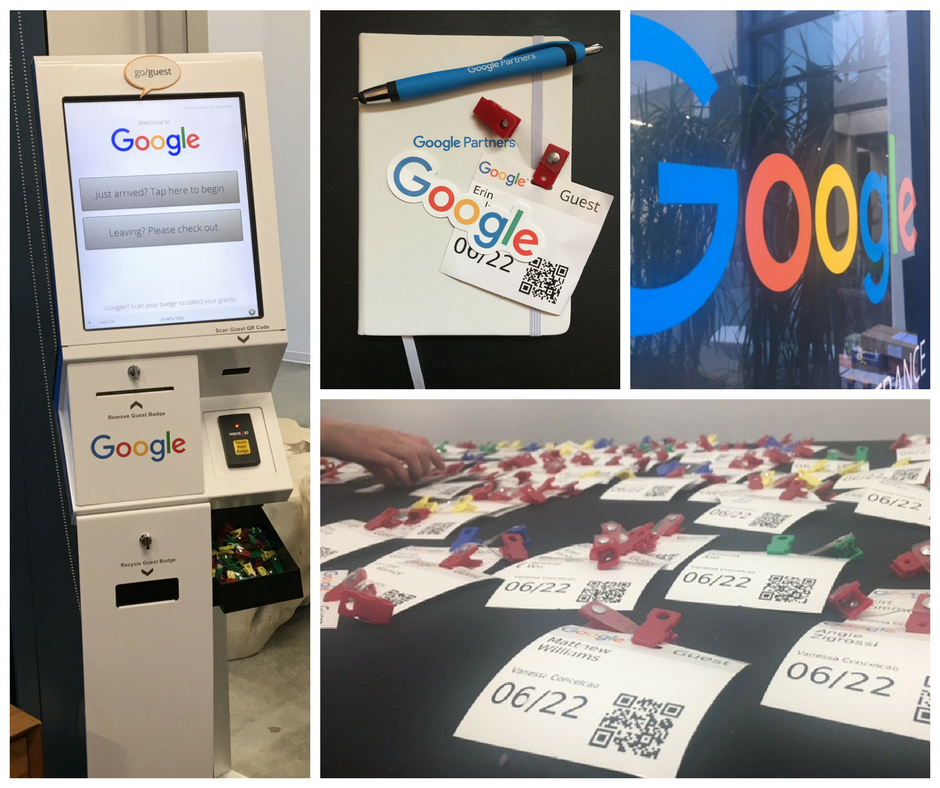 As I noticed the things around me on the Google campus, it became clear to me that there were four main categories of workplace culture I could identify. I went into this experience wanting to see this company as though it were just any other employer (which it is.)

With that mindset, I saw four clear categories of culture present on the Google campus:

Here’s a look at each one of these areas, and how Google walked the walk of their company culture.

Google’s company culture is about CONVENIENCE

One thing that many of Google’s products and services have in common is convenience.

When your email, calendar, contacts, spreadsheets, maps, (etc. ad infinitum) are synced in one location, it becomes much more convenient to move about the world.

And that convenience factor is seen in the Google workplace as well.

I saw a sign for an onsite haircut service, as well as mini snack bars stocked with healthy food and beverages. 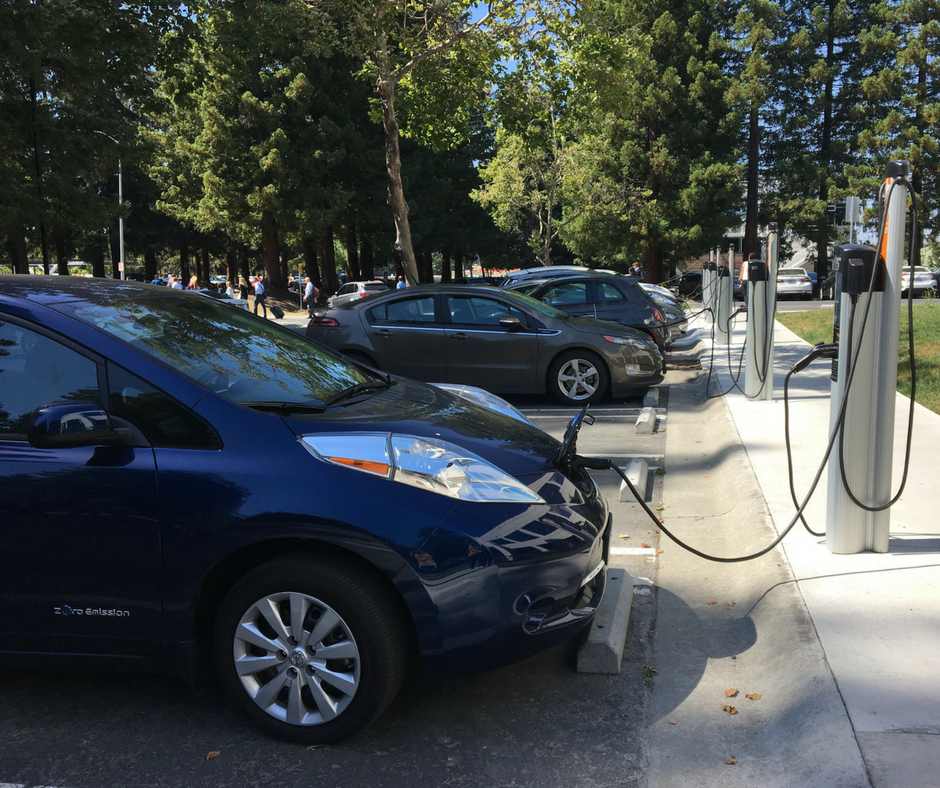 The electric car charging stations were another great touch. Those charging stations show that Google means it when they say they want to make the world a better place: they make it easier and more convenient for their employees to help them in those efforts.

The Google bikes are another convenience factor I have to mention here. Google has a large campus that is spread across many miles and buildings. To get from one place to another would be a hassle (and quite a sweaty trek in that California heat), without the bikes. 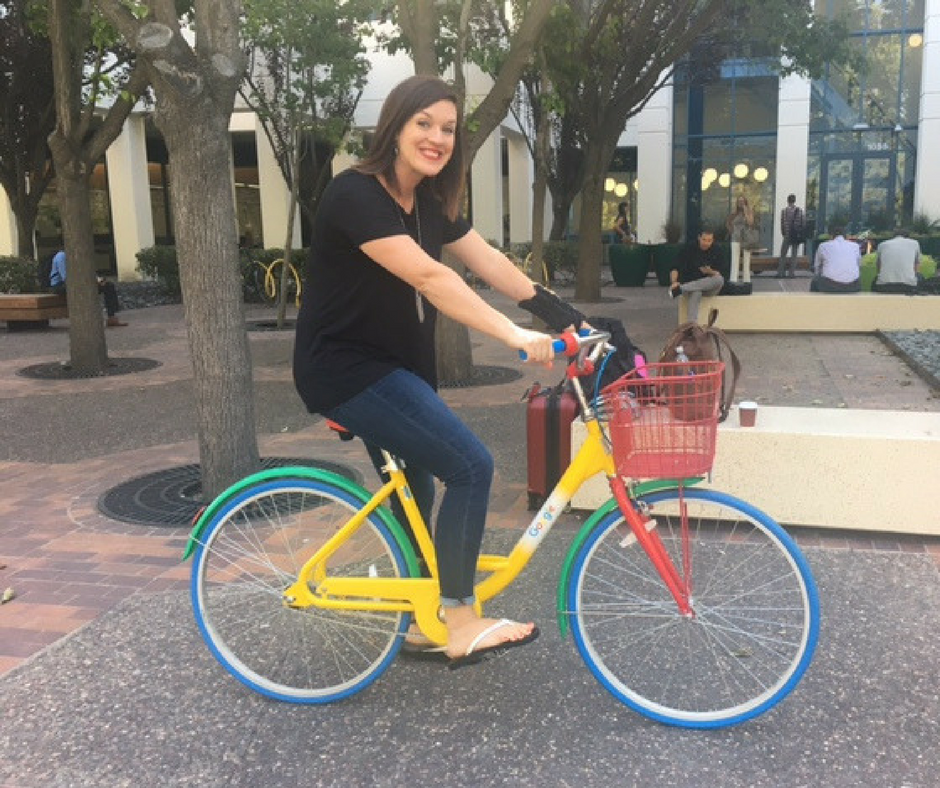 At the end of the day, I walked past the shuttle buses that were picking up employees and taking them to different parts of the Bay Area. Talk about door-to-door service! It’s a really convenient way to get to and from work and not have to worry about rush hour traffic.

Google’s culture is about FUN

When’s the last time your office had a full size dinosaur sculpture in the yard, modeled after preserved T-Rex fossils?

For those of us who aren’t paleontologists, the answer is probably never. Take a look at Stan, Google’s resident T-Rex: 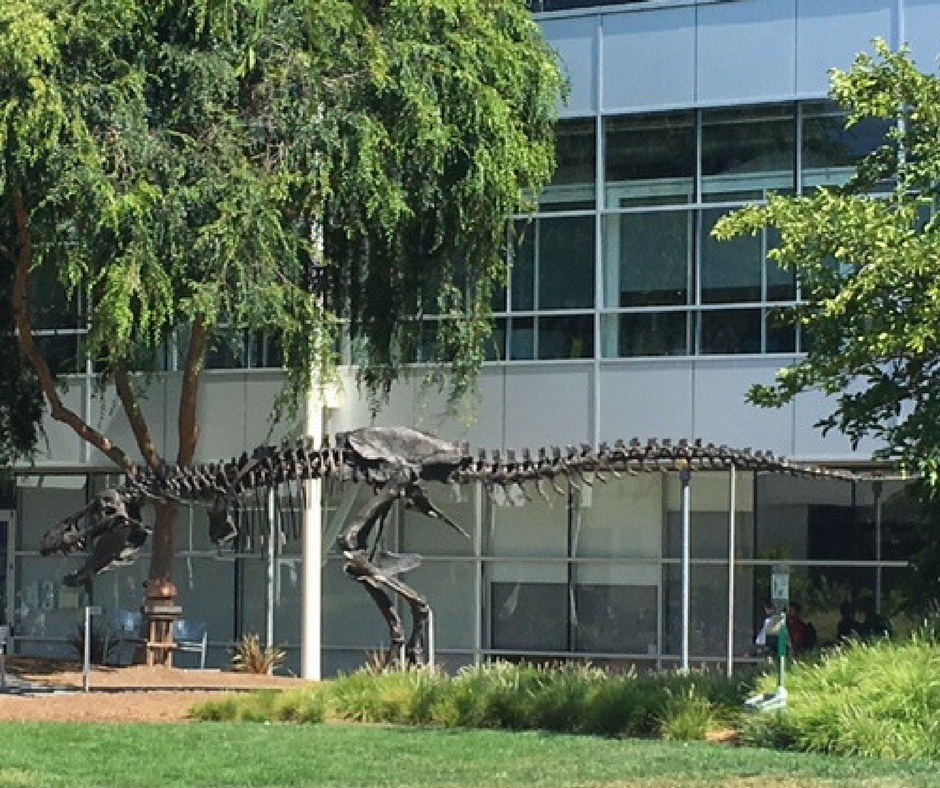 Why would a company spend resources on something like that? The only answer that makes sense is that it’s something that reflects positively on the workplace atmosphere.

At some point, someone made the purchasing decision to put Stan on the Google campus. And a decision like that wouldn’t happen if a company wasn’t dedicated to making the workplace a little less stodgy than most. 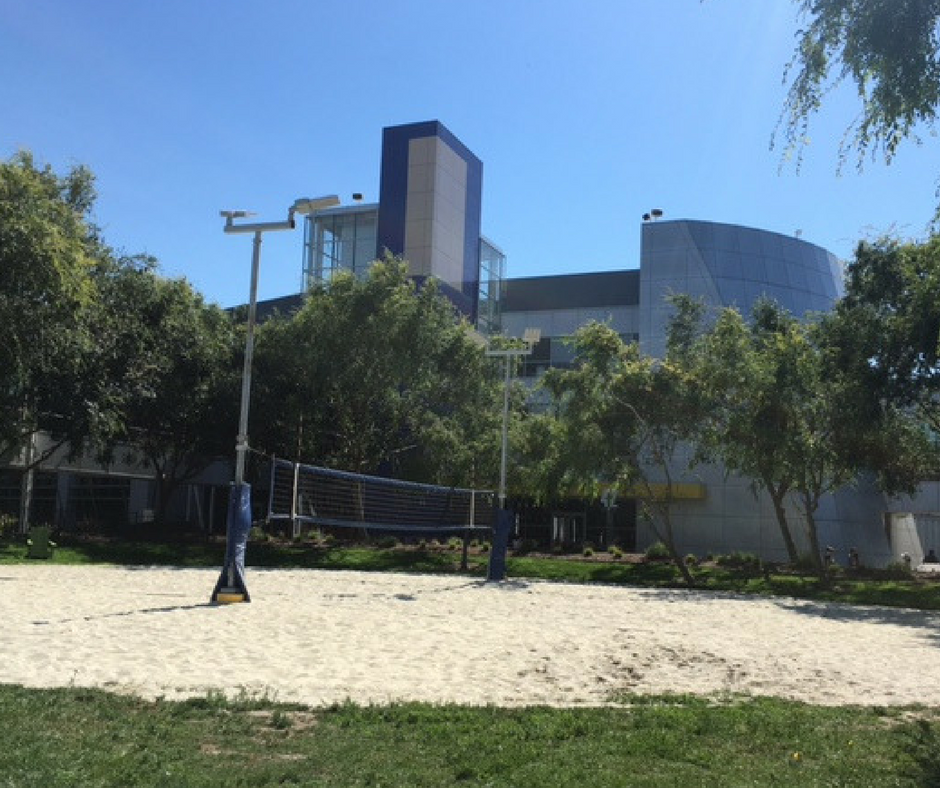 There was also the beach volleyball court, a mini-golf set-up in an office room, and a ping-pong room.

Yep, just a room with a ping pong table.

The ping pong room was in constant use the whole time I was there. Sometimes with people actually playing ping pong, and sometimes as a private meeting room for a few folks.

Google is definitely a company that embraces the culture of fun and freedom of expression, and it shows.

(Then there’s the time I met Google-founders Larry Page and Sergey Brin at Burning Man…but that’s another story.)

Google’s culture is about AUTOMATION

When I and my fellow conference attendees first entered the building, we made our way through a small entryway that was a security clearance area.

But rather than being greeted by a security guard, we were met by this fellow, pictured below: 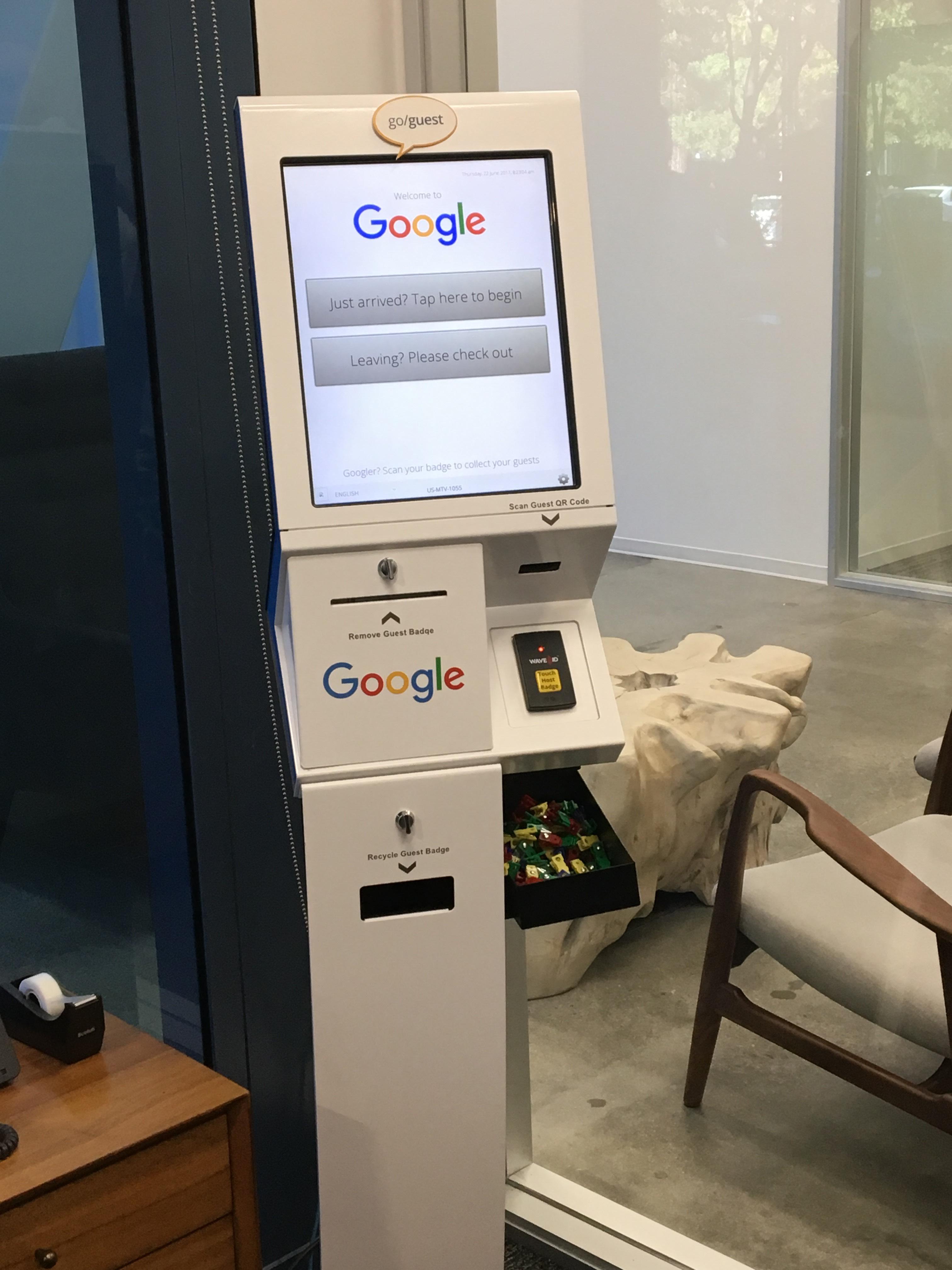 Google’s self-service check-in station is a streamlined way for guests to check in and out of the building. All without requiring a security officer to stand at the ready.

Here’s how it works.

Guests use the touchscreen to walk themselves through a check-in process that includes printing their guest badge. Whoever they are visiting gets notified that their guest is here and needs to be picked up.

When the Googler (yes, that’s what they call themselves) shows up at the check-in station, they swipe their own badge to activate their guest’s newly printed badge. There are even handy Google-colored badge clips guests can help themselves to.

Because the conference I attended was comprised of a large group, we didn’t use the badge printing station — our badges were all printed for us ahead of time.

I have been to other large tech companies where badges are required, but the process wasn’t as smooth.

Related: How to Have On Site Chair Massage in a Secure Facility

Another clear indication of Google’s company culture of automation? The fast and free wifi that required no password. Easy peasy.

So how does something like automation contribute to a company’s culture?

In Google’s case, you can see that automation as a key part of everything they do. From auto-complete suggestions in the Google search bar, to suggested locations when you’re using Google Maps on your mobile device.

Google knows that if they can automate something that doesn’t require a human to be present at every step of the way, they can let their people have more creative freedom to work on their passion projects.

Google’s culture is about WELLNESS

So I got a lot of cool pictures while at Google. But there was one picture I wanted but didn’t get.

Google has an endless pool onsite for its employees to use whenever they want. Endless pools are such a great idea because you can swim “laps” while staying in one spot — a motorized current gives you something to swim against, while the pool only needs to take up a small amount of space.

I didn’t get a picture (much to the disappointment of my boss) because as we walked past it, there was a Googler using the pool at the time. And I felt weird about taking a picture of a stranger in all their bathing beauty glory.

So you’ll just have to trust me on this: the endless pool was awesome to see. 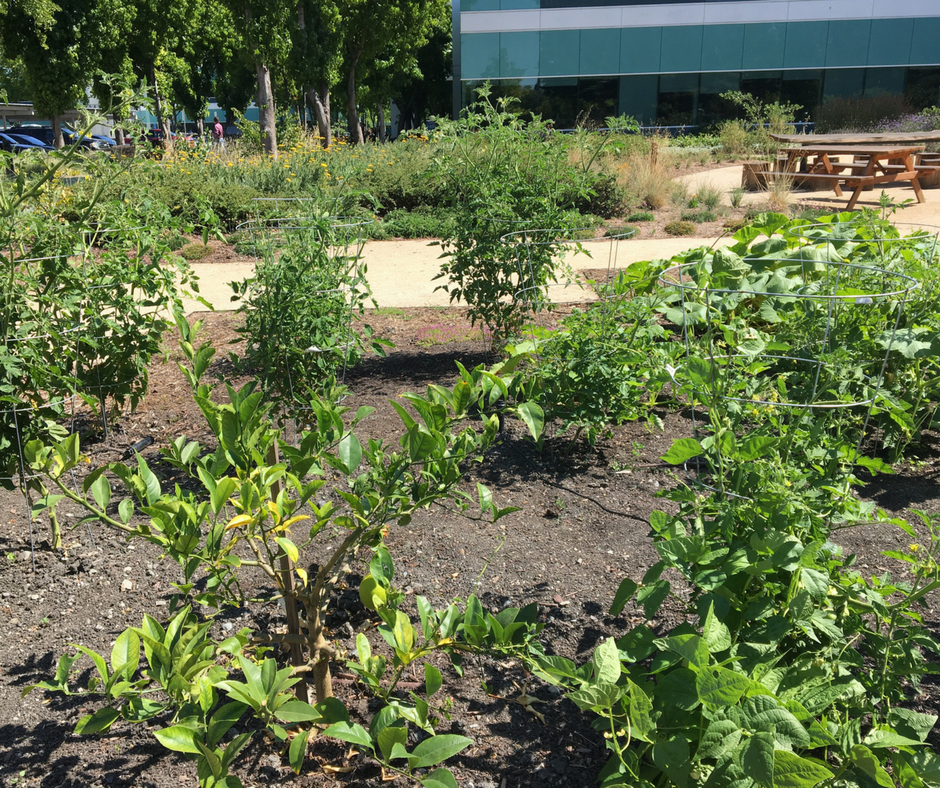 Google’s endless pool is one example of their commitment to employee wellness. In addition to the pool, there was the amazing (and huge) vegetable garden cultivated by and for Google employees.

Related: Wellness Incentive Ideas: The What and The Why

And once again, I have to mention those lovely Google bikes. Make no mistake, these aren’t just for show. I saw dozens of Googlers riding these bikes around the campus.

And don’t forget: Safety First! At the entrance to the main building I was in all day, there was a bin full of bike helmets, presumably to be grabbed at one location, along with the bike, and then dropped off when the Googler reached their destination.

I also know, but did not see, that google provides an on site employee massage service to keep employees relaxed and stress free throughout their work week.

The free healthy snacks and beverages were another great addition to Google’s culture of wellness.

So Google Has the Perfect Company Culture, Right?

This is all not to say that as a company and a brand, Google hasn’t seen it’s share of criticism and complaints.

In fact, Google was recently smacked with a $2.7 billion fine for misrepresenting search results that place their own products above others. Consumers’ increasing concerns over surveillance and online privacy puts Google’s services at the center of such topics.

You can’t get to where Google is without occasionally dropping the ball in cases like these. But since Google’s founding, the idea of “Don’t Be Evil” has been a guiding force for the company.